My husband enjoys watching me yell at the TV while I watch The 100. It is my “love to hate” show. It’s not quality television, but I can’t look away. I love the characters and I hate the stupid decisions they make! One thing I particularly appreciate is the show’s treatment of disability through the character Raven Reyes.

In addition to being the best character on the show (she’s the spunkiest, cleverest, and most creative character among the group of teenagers attempting to survive on post-apocalyptic Earth), Raven is shot in the spine at the end of Season One. She receives surgery, but has do live with chronic pain due to nerve damage afterwards.

There’s a story arc in Season Three where she’s given the opportunity to get rid of her pain (at the cost of her memories). She gives in to this solution because chronic pain is horrible, but later on fights to regain her agency and accepts her disability as a part of herself. She ends up defeating the season’s villain through her technological prowess, disability and all.

She uses a brace for the rest of the show. Her disability is not erased. It’s not cured. (She does do some impossible things later on—like crawling through a crevice and fighting—and her injury, unrealistically, doesn’t cause her any problems). But, importantly, she isn’t ignored or set on the sidelines. This is a valuable character because the majority of people with disabilities, chronic pain, and chronic illness don’t get magically cured, either.

Another character, Emori, has a deformed hand. She was cast out into the desert because of it when Murphy initially befriends her. Importantly, Murphy does not look at her differently because of it. In fact, he calls her hand “pretty awesome.”

Emori is not defined by her deformity. The hand is often hidden in later seasons, unfortunately (likely for production reasons). She often wears a glove over it. When she’s in the City of Light and could “fix” it, she doesn’t.

Jaha: “Emori, you know you can correct your defects here?”
Emori: “I would… if I had any.”

While it is important to recognize that disabilities exist, Emori isn’t really denying her disability here—she’s saying it is a part of her. 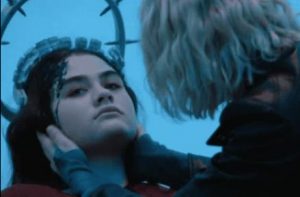 The 100 makes a misstep with Madi in the final season. Madi becomes paralyzed, though her brain is uninjured, and she is still able to perceive everything that is going on around her.

Clarke decides that the loving thing to do is to kill her (this is the part where I sat up and yelled “WHAT!?”). Clarke doesn’t try to communicate with her, despite the fact that Madi is attached to a brain-reading machine, or consider alternatives. She immediately makes the decision for her, and Madi has no agency. It’s more about Clarke—”Oh no, it’s her most difficult moral quandary yet! Will she make the hard decision yet again?”—than it is about Madi.

While Clarke making decisions for others without their consent is in character, no one argues with her. The show seems to be agreeing with her, that Madi’s life is worthless now that she can’t move. There are other events at play, here—they are in the middle of a war zone, the world is ending, etc.—but this scene still leaves a bad taste in my mouth. With all the futuristic technology at their fingertips, the show could give Madi agency, here, but it doesn’t. I wish this scene would have played out differently.

What did you think of the disability representation in The 100?