It’s pretty obvious that I’m a huge fan of diversity in fiction. This is why I was excited to see the diverse casting choices made for the Netflix adaptation of Shadow and Bone by Leigh Bardugo. The Alina of the show is not how I imagined her, because she is described in the books as “pale” with “dull brown hair,” but I loved the actor they chose for the role—Jessie Mei Li—who is part Chinese.

Li does a phenomenal job of portraying Alina’s spunk and self-consciousness. The show has come under criticism, however, not for casting Li, but for inserting a racism subplot where there was none in the source material. 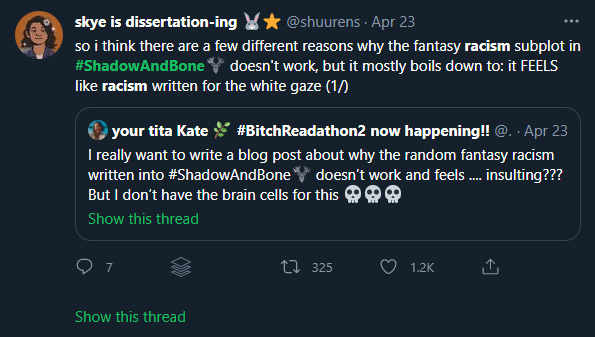 The show’s creators made the decision to change Alina’s race (making her part Shu—a people at war with Ravka) and added this subplot because Alina is supposed to feel like an outsider. A lot of those feelings are portrayed in the book through first-person narration, so they thought this was one way to clearly translate Alina’s “otherness” to the screen.

I can’t help but notice that they practically ignored another aspect of Alina’s identity, which could have been a great way to portray her as an outsider—her chronic illness.

In Shadow and Bone, the novel, Alina is described as tired, sickly, and skinny, never sleeping well or having an appetite. Some of Mal’s friends call her “Sticks” and the Darkling refers to her as a mouse. It turns out *MINOR SPOILER WARNING* that she’s sick all the time because she’s been suppressing her powers. When she finally starts using her abilities as a Sun Summoner, her health improves:

“Suddenly, lots of things seemed easy. I wasn’t tired all the time or winded when I climbed the stairs. I slept deeply and dreamlessly every night and woke refreshed. Food was a revelation.”

In the sequel novel, Siege and Storm, she stops using her power again because she’s in hiding, and she is frustrated with how weak she is, how sick she is, and how she can barely hold a job. These are familiar frustrations to those of us with chronic illnesses, and it’s refreshing to see that represented. There aren’t that many protagonists with chronic illnesses in fiction; sick characters are usually relegated to the sidelines are fall under harmful tropes.

I wondered if the show would catch on to Alina’s illness, if I’d get to see a positive representation of a hero who’s sick. Alina, however, does not look sick at any point in the show. She looks vibrant, sturdy, and healthy. The only mention of her chronic illness is a throwaway line when Alina joins the crew in crossing the Shadow Fold and Mal tries to convince her to stay where it’s safe:

She’s not that sick. It’s not that bad. Chronic illness isn’t that big of a deal.

I’m not surprised that the show glossed over this or even that people reading the book missed this part about Alina’s identity. Chronic illness is so easy to overlook, so easy to get wrong, so easy to ignore—as long as you’re not the one who’s sick.

There are so many ways to get diversity wrong, and I appreciate that Shadow and Bone is trying and gets a lot of other areas right (its casting choices, for one). I enjoyed the show immensely and am looking forward to another season.

Unfortunately, I will have to look elsewhere for representations of chronic illness. But in the book canon, at least, Alina has a special place in my heart because of her struggles with a condition I can relate to. I can’t summon the sun, and I won’t get magically better by using supernatural powers, but I understand feeling frustrated that I’m too weak to do anything but lie in bed, that I can’t have a normal job, that I rarely have an appetite, that I usually look like a skeleton that recently rose from its coffin. Those feelings of empathy and the thought that maybe, just maybe, I’m not alone, are why Alina Starkov’s chronic illness matters, and why I continue to look for diversity in fictional stories.