This is the first book I’ve read by Catherynne M. Valente, and you can certainly tell it’s not the first book she’s written. The prose sings. The story demands you read it slowly to digest its poetry and the subtle references to Earth-that-was. It’s written in a more literary style than your average sci-fi novel, which isn’t my favourite because it requires more focus than I’m accustomed to; to get the most out of the story, you should pay attention to not just what is being said, but how it’s being said. The pacing also threw me for a loop (literally). The story jumps back and forth in time, and I have never been a fan of that narrative choice. That being said, this novella is incredibly clever and the worldbuilding drew me in from page one. 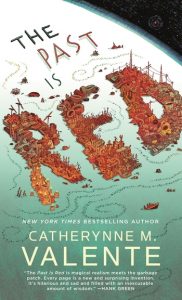 Title: The Past is Red

Summary: The future is blue. Endless blue…except for a few small places that float across the hot, drowned world left behind by long-gone fossil fuel-guzzlers. One of those patches is a magical place called Garbagetown.

But Earth is a terrible mess, hope is a fragile thing, and a lot of people are very angry with her. Then Tetley discovers a new friend, a terrible secret, and more to her world than she ever expected.

The Past is Red  is a continuation of a short story that Valente wrote for an anthology called Drowned Worlds. The short story, “The Future is Blue,” is included at the beginning of this novella, detailing Tetley’s childhood as she grows up in Garbagetown, a floating settlement the size of Texas. Then, the story continues from adult Tetley’s perspective as she survives in this fascinating (and terrifying) post-apocalyptic world.

As a nineteen-year-old recounting her childhood in Part One of the novella, Tetley views everything with love and appreciation. To her, Garbagetown is a place of wonder. She considers herself lucky, even though people tag her house with words like “Nihilist” and “Murdercunt,” she is “the most hated girl in Garbagetown” (for reasons unknown at the beginning of the story), and she gets beat up on a regular basis. Apparently, it’s the law that people can do anything they want to her, anything but kill her; she has to take it, and is even supposed to thank them for their “instruction” afterwards. Although we are never privy to a rape scene, this law heavily implies that people do more than beat her.

At first, I wasn’t sure if Tetley’s positivity was real or if she was deceiving herself and was, in reality, miserable. However, her upbeat attitude appears to be genuine. She really is looking at the “brighter side” of life.

I appreciate the author’s decision to create a bubbly character who is determined to enjoy life no matter what her circumstances. Her attitude is a fascinating contrast to the grimness of her situation. However, sometimes her optimism shifts from admirable to disturbing. In Part Two of the novella, twenty-nine year old Tetley has been living alone for a few years, and says that she misses being beat up and abused and recalls how “honored” she was that they would attach jumper cables to her skin (because her abusers used up precious electricity on her). Her tone is so genuine that it’s difficult to read this section as sarcastic. Taken at face value, that is a problematic narrative, but it does seem as though Tetley has become a little unhinged due to her time alone and becoming the scapegoat of an entire garbage nation (and who can blame her). As Part Two continues, Tetley is much more hurt and bitter than before, though her love of Garbagetown is unrelenting.

The Power of Pop Culture and Brand Names

I adore how Valente integrates pop culture and the longevity of brand names into the narrative. In the very first paragraph, we learn that Tetley has a bird named Grape Crush and a seal cub named Big Bargains. The fact that she would name her pets after something she read on an old soda can or shop sign makes perfect sense in a town full of garbage.

I also love the little bits of strangeness woven into the society—like how people leave home when they’re ten to “find” their name (you don’t bother getting a name earlier than that because so many people die before they reach ten years old). As a result, people are named things like Tetley, Time, Life, and Goodnight Moon.

But my absolute favourite pop culture reference is how Oscar the Grouch is revered as a saint (who else would be the saint of Garbagetown, after all?). Tetley even has a “St. Oscar” backpack to remind her that he’s always watching her back.

In the afterword, Valente writes, “I wanted to write about a post-apocalyptic world where our civilization was not looked back on with awe and admiration, as it is in so many books of the genre, but disdained as the fuckwits we are, who wrecked a perfect biosphere because we couldn’t be bothered not to.”

Somehow, this book manages to be hopeful and discouraging at the same time.

Overall, the author utilized storytelling methods that I’m not the biggest fan of, but The Past is Red can’t be denied for its wit, cleverness, amazing character voice, and positive themes. 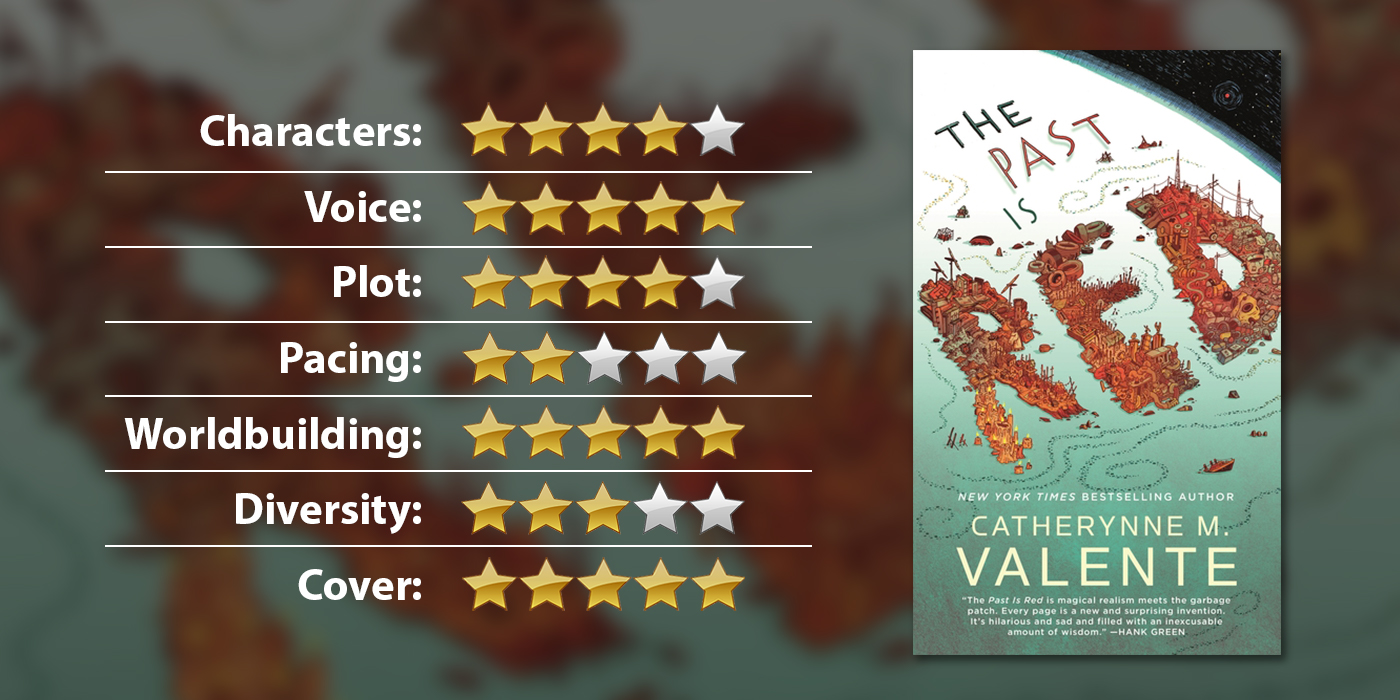 Thank you to TOR / Netgalley for the advanced review copy! 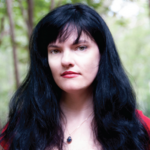 “Catherynne M. Valente is the New York Times bestselling author of forty works of speculative fiction and poetry, including Space Opera, The Refrigerator Monologues, Palimpsest, the Orphan’s Tales series, Deathless, Radiance, and the crowdfunded phenomenon The Girl Who Circumnavigated Fairyland in a Ship of Own Making (and the four books that followed it). She is the winner of the Andre Norton, Tiptree, Sturgeon, Prix Imaginales, Eugie Foster Memorial, Mythopoeic, Rhysling, Lambda, Locus, Romantic Times’ Critics Choice and Hugo awards. She has been a finalist for the Nebula and World Fantasy Awards. She lives on an island off the coast of Maine with a small but growing menagerie of beasts, some of which are human.”

2 thoughts on “Review: The Past is Red by Catherynne M. Valente”