My favourite part of the live-action Mulan was the five second cameo by Ming-Na Wen at the end. Not a good sign.

As I watched the movie on Disney Plus, I wondered if the writers had sat down and asked each other, “How can we take every single plot point from the original movie and make it worse?” But the main problem with the movie—why it seems lacklustre in comparison with the original—is Mulan herself. And I don’t mean the performance by the lovely Yifei Liu, who does great with the script she is given. The problem is removing Mulan’s humanity from the story, in what I can only assume is an attempt to make her “cool.”

To show you what I mean, take a look at the pivotal scene at the beginning of the story, which occurs in both movies, in which Mulan disappoints the village’s Matchmaker. 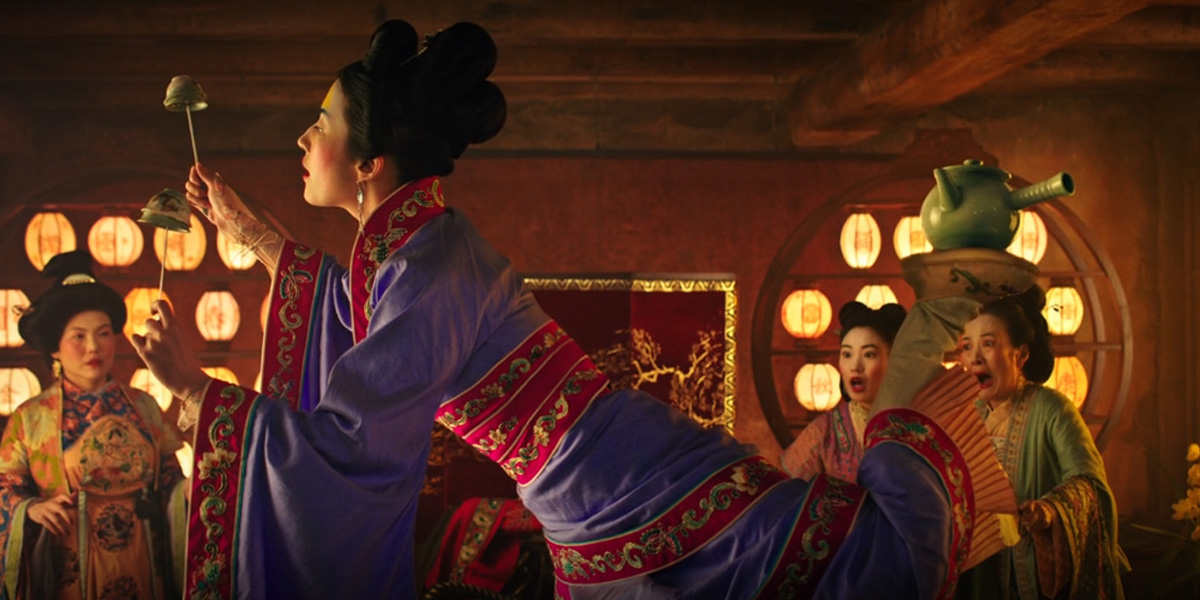 In the live-action movie, a spider startles all the ladies seated at the table, and they flip the table over in shock. Mulan deftly catches all the cups and the teapot before they hit the ground, but the clip holding her hair falls out and she loses her balance. The Matchmaker then declares that Mulan’s parents have “failed to raise a good daughter.” But Mulan doesn’t actually make a fool of herself at any point—she is poised, calm, and collected the whole time. She’s basically dismissed for no reason. 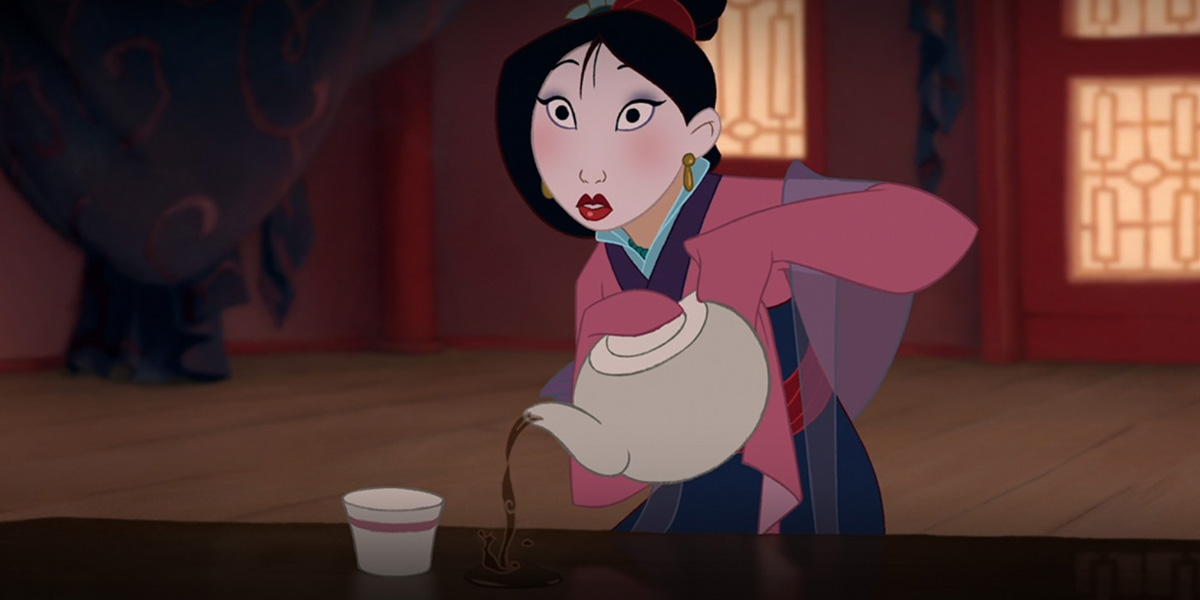 In the animated version, Mulan is obviously not comfortable in her makeup or dress, which has sleeves that are too long. Plus, she’s trying to hide the cricket from the Matchmaker, stuffing it in her mouth at one point. She’s written down the “final admonition” she’s supposed to recite, because she can’t remember it, but it smudges on her arm.

“Fulfill your duties calmly and respectfully. Reflect before you snack… act!” —Mulan (1998)

The ink transfers to the Matchmaker’s hand when she grips Mulan’s arm, causing Mulan to stare, the cricket gets in the tea, Mulan crawls on the table to try to prevent the Matchmaker from drinking the cricket… and chaos ensues! Part of what happens isn’t Mulan’s fault, but part of it is due to her awkwardness. So as we watch, we may feel both angry at the Matchmaker and embarrassed on her behalf.

The animated-version Mulan is wonderfully human, with flaws and all. When she takes her father’s place as a soldier, she doesn’t know how to fight, she isn’t strong. Part of what makes the animated movie so engaging is that Mulan grows throughout the story. She trains and practices, becoming a good soldier through hard work. She also often uses her brain instead of her brawn. 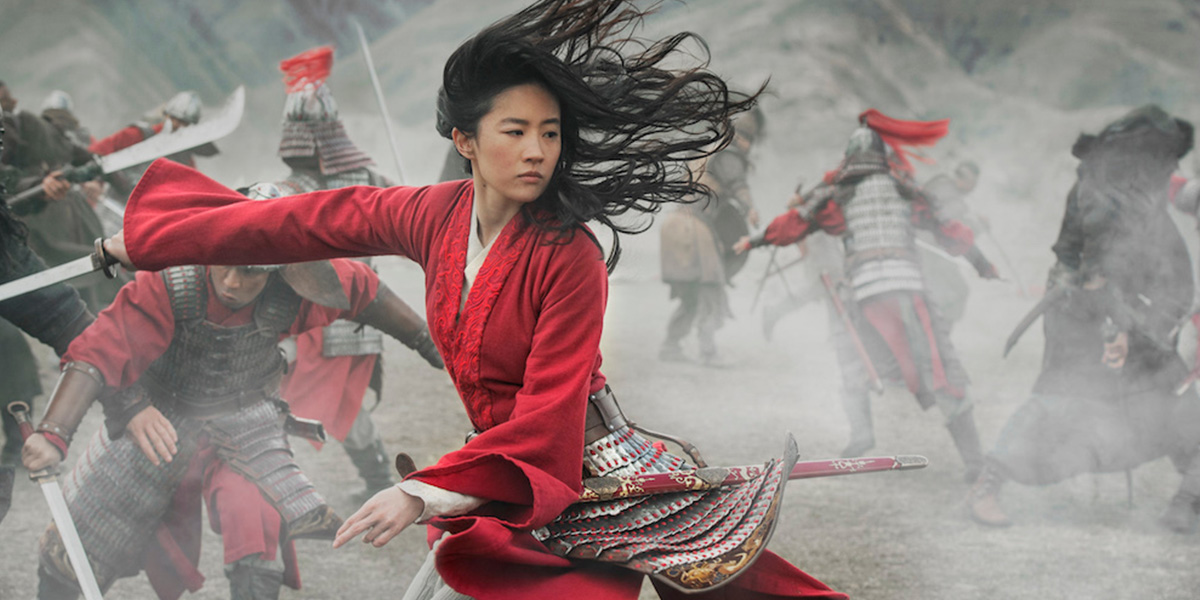 The Mulan from the live-action film is already an amazing fighter, having to hide her “chi,” something a woman isn’t supposed to have, from others. She is constantly in control of everything that happens to her, as opposed to the animated version, in which Mulan is frantically trying to keep up with events—a much more human experience.

One of the most significant examples of the live-action Mulan’s control is that she chooses to reveal her gender. The witch (a new character), tells her that she can never succeed if she’s hiding who she really is. Mulan takes this to heart, riding into the middle of battle without her armor, long hair flowing behind her. This is supposed to be a triumphant moment in which Mulan finally takes control of her story, but it falls flat for me because she has actually had control the whole time. 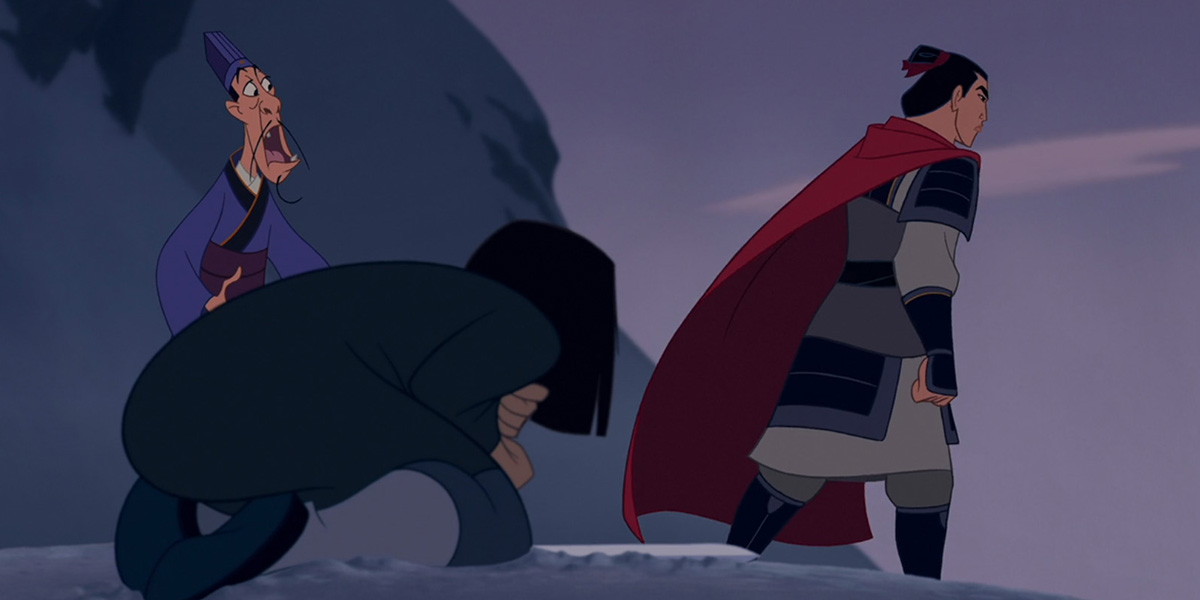 In contrast, animated Mulan is determined to hide her identity because revealing it would dishonour her family. Her gender is revealed accidentally, after she is injured. And the scene is heart-wrenching rather than triumphant, as we watch her friends turn their backs on her.

When she finds out Shan Yu, the villain, is still alive and the Emperor is in danger, she races to warn her friends. Here, Mulan starts to take control of her story, and it’s significant because she hasn’t had much agency up to this point. She demands that her friends listen to her, and when they refuse, takes matters into her own hands. She becomes a hero because she has to. Her story is so much more real, so much more human, so much more emotional than the story of the live-action Mulan.

The live-action film works as something you watch for the cool fight scenes; the filmography is lovely, the scenery beautiful. The animated film is what you watch if you want character development, scenes in which you actually feel for the protagonist, and a story arc that works because you’re invested in the characters. Watch the animated version if you want to learn to write a good character arc. I love this Mulan because I want to see characters who are realistic, who are imperfect like me. Protagonists like that are what make a story worth coming back to again and again.