Each month, I feature an interview with an expert on how to write about a character with their chronic illness or disability. While I still recommend getting a sensitivity reader for your work, use these posts to consider how you can accurately portray disabled characters. Today’s feature is Prosopagnosia with Claudia Gironi (a.k.a. Wisesnail Art). Shout out to Claudia for taking the time to answer my questions below!

1. Could you describe your symptoms and the experience of discovering them?

“I find it quite hard to describe how face blindness works for me. To me, it means that when I am face to face with someone, I perfectly “see” their faces, but as soon as they are not in front of me, I can’t fathom what they look like. Most of the people I meet fit an “archetype” (blond, dark-hair-and-blue-eyes, dark-skin, many piercings, etc.) that can be traced back to the people I knew as a kid. It’s like my brain thinks: “Oh this person has bright blue eyes and dark hair like your friend from Primary School, so they look alike,” even if, in truth, the two people I am comparing have nothing else in common. Nowadays, I know that this is the path taken by my brain, and I use this awareness to group together people and then guess who they are (this is easier when the people that my brain finds similar live in different places: I can safely assume that it’s more likely than I’m in front of one and not the other).

“While growing up, I didn’t know that prosopagnosia was a thing. I simply thought that I must be very distracted or very stupid. I could never recognize the guys my best friend had a crush on, and ended up lying a lot to cover for my perceived idiocy (spoiler alert: it’s not a sustainable strategy, and can have embarrassing, albeit hilarious, consequences). I then read an article about a writer that I liked, in which he confessed that he had this condition, raising awareness among his public, and this helped me a lot; it made me feel validated for the first time.”

2. Do you use alternate methods to recognize people? If so, what are they?

“Yes, I definitely do! As I said before, my brain automatically groups people, which is helpful especially if I have extra help, for example, knowing where someone lives, how they walk, talk, dress, what pets they have, etc. I am more likely to recognize someone I know in real life than an actor (despite the fact that once I didn’t recognize my mum because she was in a place I didn’t expect her to be, and when I realized that, well, she was my own mother, I got quite upset about the fact that I couldn’t tell). Most of the time, actors don’t look the same in films and in real life, and the way they talk or behave is different than how they talk or move when acting.”

3. What are some of your biggest frustrations living with prosopagnosia?

“I don’t think many people get it, and I had my share of being mocked as a consequence. I have resigned myself to the fact that I either approach strangers thinking I know them, or ignore people I know because I don’t recognize them, and many take it very personally.

I also struggle when watching movies, especially if people change appearances often or if two characters are similarly dressed or have similar features (long hair of the same colour, same height, etc.). Thankfully, my friends know this, and if they’re watching the movie with me, they tend to point out who is who. :)”

4. Does anything make life with prosopagnosia easier?

“It’s the small things, you know? In the office, many people tend to put a name tag on top of their monitor, and this abates my anxiety of making a fool of myself in the work setting. Or when I attend conventions, sometimes everyone wears a label with their name, and this is extremely helpful as well (even if I then have to explain why I spent a few minutes staring at them: I was just trying to read their name tag!).”

5. Do you struggle with any particular emotions due to prosopagnosia?

“Prosopagnosia causes me some anxiety, especially when I’m among people I’m not familiar with – I am afraid that they will think I’m stupid, and as much as I try to raise awareness about this issue, sometimes it’s really not the right place or time to have lengthy discussions about this topic.

“Also, even now, I can’t help but feel stupid when I don’t recognize someone, and I’m still battling with myself to overcome this mental attitude.”

6. How do other people behave around you? Do they treat you differently?

“Friends and family try to help me, which is appreciated even if sometimes their idea of helping is not that helpful at all. But all in all, I think that not many people are aware of what face blindness is, and they simply assume I’m distracted, or I’m bad at faces to a normal degree, like some people are bad ‘at names,’ etc.”

7. What was your diagnosis experience like? How has your experience with doctors been?

“There’s not much that a doctor can do about prosopagnosia, so I don’t have particular feelings about when I told my GP—he didn’t say anything I didn’t know.”

8. Have you seen this condition represented in media (TV, film, books, video games, etc.) before? What are some common pitfalls or stereotypes writers should avoid?

“I don’t think I have even seen this condition represented in media. Based on some misconception that my friends had, I think writers should avoid describing face blindness as an actual inability to see faces—I can see them perfectly, and I am almost obsessive about some details that are ignored by others (such as the shape of the tarsal plates, the depth of the eye sockets, that kind of things). It’s just that as soon as the person is not in front of me, I almost ‘forget’ their face, and when I see again that same face, it doesn’t click, and even if I think ‘this person looks like x,y,z’, I’m never entirely sure.”

9. You create a lot of gorgeous fan art, and your ability to capture actors’ faces is amazing. How does prosopagnosia affect your painting process?

“I think it helps me focus more on details. I often think that I could recognize a specific actor’s nose among billions, but if I were to recognize the whole face…. Well, that would simply be impossible!

“The only problem is that when I work on commissions, the client sometimes sends more than one reference photo for different characters. It’s happened in the past that I couldn’t differentiate them, and had to ask a friend to come over and group those photos for me according to the different actor/model portrayed.”

10. What advice would you give to someone who wants to accurately write about a character with this condition?

“I think it’s likely that the character would mistake very often who someone is, but not always in obvious ways. Granted, once I got into the wrong car because I thought that the driver was the friend I was supposed to meet exactly in that spot (spoiler alert: he wasn’t, and he looked at me with terrified eyes—while I stared at him for long, uncomfortable seconds, horrified by my own mistake), but most of the time I simply approach someone and then abort my greetings at the last second because “the brown shade of their hair is not right” or something similar. I say hello to people I don’t know because I think I do, and don’t acknowledge my friends if I’m not expecting to see them in that specific place.

“I reckon the character might react in different ways when they fail to recognize someone, ranging from awkwardness to anxiety, laughter or a bit of sadness because you really like someone and ‘can’t even remember their face, what’s wrong with you?’ (Nothing, Nothing is wrong; people with prosopagnosia just have to face more riddles per day than the average human, and even if we don’t always get it right, this just makes our lives more exciting.) :)” 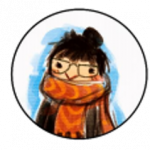 Claudia Gironi, a.k.a. Wisesnail on the web, was born in Italy, but currently lives and works in London. Japanese Language and Culture graduate, Schiele enthusiast and art lover, she decided to teach herself digital painting a few years ago—and since then, she has never abandoned her stylus. Huge fan of atmospheric landscapes, portraits, and colour explosions, she mainly works in Photoshop, combining the versatility of the digital approach to the expressive brushstrokes of a more traditional method.