People look for themselves in the stories they watch, read, and hear. That’s why it’s been so exciting to see more people of colour, more females, and more sexual identities represented in books and TV. Similarly, people with disabilities and illnesses yearn to see themselves in their fictional heroes.

Representation is important, but writers often get details wrong or fall into stereotypical portrayals of characters with health conditions. To get it right, talking to people who actually have your character’s illness is paramount, and this is where my new blog series comes in!

Each month, I will feature an interview with an expert on how to write about a character with a chronic illness or disability that they struggle with. While I still recommend getting a sensitivity reader for your work, use these posts to consider how you can accurately portray disabled characters. Today’s feature is Celiac Disease (or Coeliac Disease, if you prefer the British spelling), with guest writer, Vikki Patis. Special thanks to Vikki for taking the time to answer my questions below!

1. How would you describe your symptoms?

“Coeliac disease is, in brief, an autoimmune disease whereby eating gluten prompts your immune system to attack itself. If I’ve been ‘glutened,’ I can have a range of symptoms from a stomach ache, vomiting, diarrhea, fever, and fatigue. This generally means a lot of time spent in the bathroom! I was diagnosed at the age of 26 and have some long-term damage from going undiagnosed for such a long time, and my immune system was so weak I was often ill with every cold or bug going around. If left untreated or a gluten-free diet is not strictly followed, coeliac disease can lead to more serious problems such as diabetes and cancer. I’ve had to be extra careful since Covid-19 hit, as my immune system would be even more vulnerable if I was glutened.”

2. What are some of your biggest frustrations living with this condition?

“Having to be so careful is probably the biggest frustration. You always have to think about what you’re eating, whether it’s safe, and you pay dearly for any slip-ups! My publisher once sent a box of Hotel Chocolat as a publication day gift, but they had a ‘may contain gluten’ warning so I couldn’t eat them. Cross-contamination is always a worry, as gluten-free food is often cooked in the same area as gluten-containing food, so even before the pandemic I very rarely went out to eat.”

“I have never seen coeliac disease represented in the media, which is why I included two characters who live with it in my third novel, Girl, Lost, and another in my fifth novel, In the Dark, which is out in March. I wanted to portray the reality of living with coeliac disease, and hopefully educate more people. I had a reviewer complain that chips and jam don’t tend to contain gluten, despite the explanations in the book regarding cross contamination (the oil the chips are cooked in, crumbs in jam), so it’s important that more people understand the reality of coeliac disease, especially those who work in the catering industry or have gluten-free friends or relatives.”

4. What are some common pitfalls or stereotypes writers should avoid?

“A gluten-free diet is often included as a joke or a fad in the media, something for other characters to roll their eyes at. It might seem like a small thing, but this perception leads to a misunderstanding of coeliac disease, with restaurants advertising gluten-free food but cooking them in the same area, meaning it is unsafe for people with coeliac disease. This is why it’s so important to have realistic representation in the media.”

5. What are things you can’t do because of your condition?

“I can’t eat at other people’s houses due to the high risk of cross contamination. Even a crumb can have an effect on someone with coeliac disease, so things like shared tubs of butter or communal toasters are a no-no. I struggle to find restaurants or takeaways where I can safely eat, and it’s always a risk even if you find a suitable place. One restaurant chain accredited by Coeliac UK glutened me twice!”

6. What advice would you give to someone who wants to accurately write about a character with this condition?

“I would suggest speaking to people who live with coeliac disease and asking them about the reality of it. It’s something that affects so many aspects of our lives, things which those without the condition might take for granted. For example, Imogen and Emily in Girl, Lost travel to another site for work, and Imogen has to spend time considering where she can eat when booking the hotel. Seb’s grandmother Liv in In the Dark struggles to make ends meet, and since gluten-free alternatives are often very expensive, she worries that she can’t afford to buy him what he needs.” 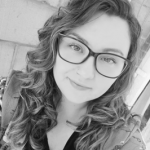 Vikki Patis is the bestselling author of psychological thrillers The Wake (2020), Girl, Lost (2020), The Girl Across the Street (2019), and The Diary (2018). Girl, Lost, a top 100 bestseller on Amazon, was later longlisted for the Not the Booker Prize 2020. In the Dark will be released by Bloodhound Books in March 2021, with three more to follow. She is represented by Emily Glenister at DHH Literary Agency and also writes historical fiction.

Vikki runs The Bandwagon blog, where she provides author services such as editing and web design as well as writing articles on a wide range of topics, and the Psychological Suspense Authors’ Association. She used to write for various websites, covering topics from living with a chronic illness to body positivity to feminism.