I’m excited to announce and reveal the cover for the first book in my Gender-Swapped Classics series: Victoria Frankenstein! Below is the summary:

Victoria Frankenstein uses her scientific talent to do the unthinkable: create life. But when she sees the horrible thing that her years of toil produced, she flees, the beauty of her dream replaced with disgust. Not even her best friend, Harriet, or her betrothed, Elias, can distract Victoria from what she has done, and when her own sister is inexplicably murdered, she realizes she’s living a nightmare. The creature is out for revenge and won’t stop until Victoria, and everyone dear to her, is destroyed.

Why am I publishing a Gender-Swapped Classics series, you ask? First, I thought it would be fun. Second, I’m hoping it will bring joy to people who already love these stories, and that it might entice new readers to enjoy the classics. Third, it’s fascinating to shed light on how society views gender, and equality matters.

For Victoria Frankenstein, I switched almost every male to female and vice versa, which resulted in a matriarchal society.  Certain things I might have skimmed over without much thought, such as Frankenstein treating his betrothed like a possession or the author referring to women as “girls” but never to men as “boys,” jumped off the page when the genders were reversed.

Without further ado, here is the cover! I hope you like it. It was really fun to capture Frankenstein’s arctic voyage with that ominous lightning in the background. 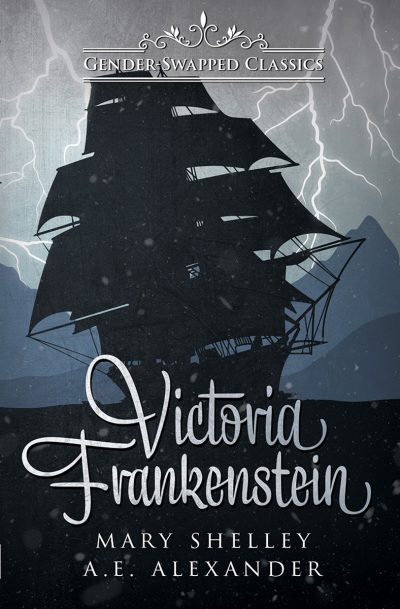 Victoria Frankenstein will be available June 3, 2022. Visit the book page to pre-order now and add it on Goodreads!

A.E. Alexander is a writer, editor, artist, gamer, and chronic illness wizard. She's the author of a variety of fiction and nerdy nonfiction, including Super Sick, Making Myths and Magic, and the Gender-Swapped Classics series. From her home on Hoth (a.k.a. Canada), she blogs about writing, publishing, and worldbuilding. Subscribe to her newsletter, the WaRPzone, for articles on writing SFF.

– 10 Cover Designers for Science Fiction and Fantasy
– How to Write Disabled Characters
– How to Self-Publish a Book: An Overview
– How to Become a Fiction Editor

Working on my next Gender-Swapped Classics story—COUNTESS DRACULA. It keeps most of Bram Stoker's original text in tact, but I'm definitely editing out Van Helsing's sexism. Geez, that guy. "Mina has a man's brain." COME ON. #Dracula #BramStoker

Replaying #OriAndTheBlindForest, because we're going to be talking about it on the @wbtavernpod. So beautiful. So emotional. #Gaming